I’m very sad to say that a fire broke out in Torres del Paine at 7pm on Tuesday (27th December).

At the time of writing this post this is the most up to date and reliable reference point I have but things are changing quite rapidly.

The fire started on the Eastern edge of the Grey lake and initially it seemed that is was relatively isolated (with only 15 hectares reported effected in the initial reports). Although around 20 people in the Grey area were moved to safety the majority of the park was unaffected. 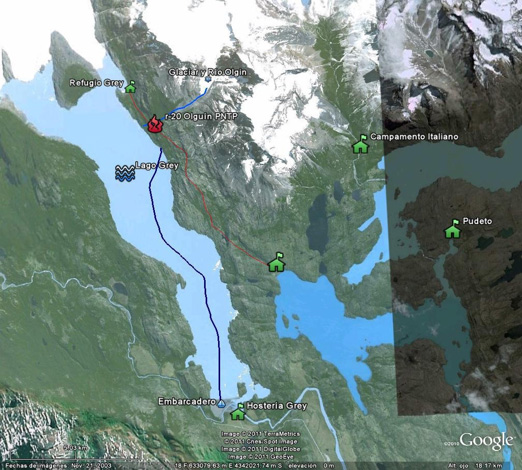 However the strong Patagonia winds (reportedly up to 90km/h in the last few days) and the steep and rugged terrain have made it very difficult to contain and fight and it has spread quickly.

Five years ago a Czech hiker admitted to accidentally starting a fire that englufed the East of the park when he used his gas stove in an unauthorised area. Now, it seems people suspect human causes for this fire as well.

A guide with one group of Swoop clients has had to adapt their itinerary. We hope no others will be effected, but this is a very popular time to visit Torres del Paine.

All updates welcomed in the comments below.

This is a helpful map of the area affected: https://www.latercera.com/multimedia/interactivo/2011/12/687-38825-4-incendio-forestal-en-torres-del-paine.shtml

Latest understanding at very end of day on 30th December is that the park may be closed for at least one week, possibly the whole of January.

In ‘An Englishman in Patagonia’, John Pilkington beautifully details his eight-month backpacking trip, south from Santiago, winding his way along the Andes, through the heart of Patagonia to the end of the world in Ushuaia, before heading back up the…
END_OF_DOCUMENT_TOKEN_TO_BE_REPLACED

Many of our customers visit Patagonia to enjoy the extensive variety of hiking trails in Torres del Paine, Los Glaciares, Tierra del Fuego and further north towards the Lake District. They will often ask us “why should I use a…
END_OF_DOCUMENT_TOKEN_TO_BE_REPLACED

My mission during my recce of Patagonia in spring 2016 was to delve into Chile’s little-known region of Aysén. I tracked condors, mountain biked in remote national parks and took to the water multiple times to see sights only accessible by boat…
END_OF_DOCUMENT_TOKEN_TO_BE_REPLACED

A handful of Swoop’s customers choose to venture to both Patagonia and the Antarctic on the same trip. Swoop only specialises in these two destinations and so is perfectly placed to offer the dream trip to someone looking for a…
END_OF_DOCUMENT_TOKEN_TO_BE_REPLACED