In Torres del Paine the W trek is the classic route that many people hike that takes you to 3 magnificent valleys – the ascencio, Frances and Grey valleys. For more experienced hikers there are a number of different routes including the Paine Circuit and others that take you off the beaten track and allow you to see another side to the park.
On my recent trip to Torres del Paine I wanted to see these routes that I hadn’t seen before.

The first route was the Oggioni pass high up above the Ascencio valley. This pass slices through the Paine range from the towers viewpoint directly to Dickson camp and looked incredible.  As I was short on time I recced the pass as a day hike from Hotel Las Torres but for very strong walkers you can hike across the pass to shorten a circuit trek or to create a completely different trek. Here is a description of the route and how we got on.

The sun rose in a glorious and triumphant glow,

We set off along the trail up the ascensio valley to the towers.

Instead of following the general migration toward the viewpoint…

…. We turned off and only caught this Scoundrels view of Las Torres.

The path became small as we stumbled through a boulder field….

….and into the woods.

We followed the Ascensio river as it bubbled its way down through beech forests.

There was no one around and we were on tenterhooks, certain that we would see a Huemul deer.

Our target lay on the ridge ahead.


At Japones Camp a climber’s camp with a ramshackle shelter made from Tarpaulin, string…

…and fallen branches and hung with victoriously and carefully chiselled wooden plaques in celebration of climbs past.

As the path narrowed we turned off it altogether…..

A tricky river crossing followed which involved crossing on all fours.

Before doing this trek ask yourself if this is a river you feel able to cross.

…and we wander up through the forest, free of paths and people.

The edible Pan de Indio didn’t tempt us as we toiled.

As we left the treeline…

…the views started to open out…

…and as we climbed…

…the peaks of Escudo and Fortaleza dominated the Silencio valley.

Rock dykes guided us towards the pass.

We left the valley far below, this was no place for vertigo…

The final push to the pass was snowy and early in the season much of the scree slope can be covered in a layer of snow.


At Paso Oggioni the view opened up to reveal Dickson lake. If you are continuing onward the trail bushwhacks down to Refugio Dickson at the near end of Lago Dickson.

A further climb to Punta Oggioni reveals the Silencio valley. and a view back the way we’ve come…

…and a peek at the back of the towers and the peaks of Escudo and Fortaleza peaks.

My guide, Justin had been to the pass but never scrambled up to the viewpoint above. We whooped with excitement for a good 5 minutes…

The wind was starting to throw us around so we descended back to camp.

For more information on The Paine range’s most adventurous trek, get in touch today. 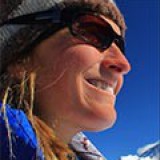 Harriet first started planning a trip to Patagonia at the age of 14 when her parents returned from a holiday there. Four years later she went to work in the remote Patagonian region of Aysen where she discovered trekking, the great outdoors...and her future husband. From this base she went on to trek in Torres del Paine and throughout Patagonia, Bolivia and Peru before going to University.

When Harriet returned to the Andes she did so with her bicycle and spent two and half years biking and mountaineering throughout the Andes, climbing 8 of the 12 highest Andean peaks completely independently.

Harriet joined the Swoop team in 2014 and on her most recent visit to Torres del Paine and El Chalten she checked out both the traditional hiking trails and some off the beaten track trails that she likes helping our customers to discover.

See all posts by Harriet →