If you’re a wildlife fanatic like me, the variety of magnificent creatures to be found in Patagonia makes it the ideal place for an outdoor adventure. From the apex predator: the Andean puma, to the gargantuan humpback whale, with a whole plethora of weird and wonderful birds and mammals in between. During my trip to Patagonia in April 2016, I was thrilled by sighting five pumas in one day, 34 humpback whales in two days, not to mention scuttling hairy armadillos, snuffly hog nosed skunks, hilariously clumsy penguins, and magnificent birds of prey.

Another bonus is that there is nothing too creepy or dangerous down in Patagonia either – even the pumas regard us humans as rather insignificant: neither a threat nor a meal! There are no dangerous snakes or spiders, and very few mosquitos.

So here’s a quick rundown of my top 5 wildlife experiences in Patagonia. I hope it fuels your love for Patagonia as much as it has mine, and inspires you to go out there and see it for yourself!

The hairy armadillo has been a long term obsession of mine – I had never seen any sort of armadillo before, and have been totally fascinated by the hairy Patagonian variety. It was my dream to spot one on this trip, and during my stay at a luxury lodge just outside of El Calafate, it became a reality. Just 10-20 metres stroll from the hotel, amongst the scrub land, a sudden scuttle could be heard on the other side of a bush. I dashed across to see what it was, and just a strange hairy yet armoured tail could be seen disappearing into the bush. I waited it out, and a few minutes later, this little guy appeared to greet me… 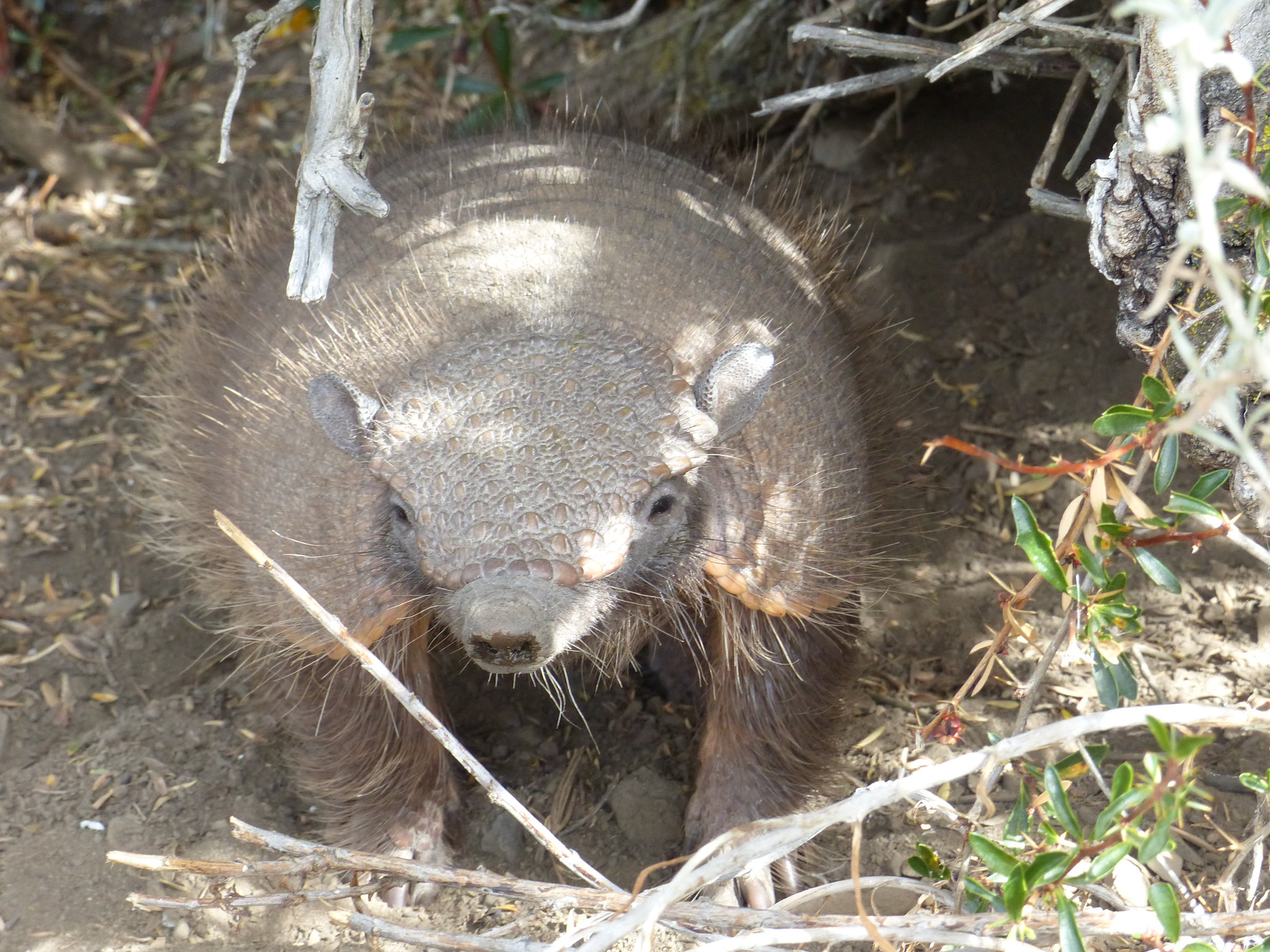 With a degree of caution at first, he sidled out of his cosy looking burrow, snuffling around for juicy bugs. Finally, he emerged fully, and walked up to me within about half a metre. They have terrible eyesight and I don’t think he even realised I was there!

I’ve been a total big cat nut for as long as I can remember, and although I’ve been lucky to spot lions, cheetahs, leopards and caracals in South Africa, spotting pumas in Patagonia is a totally different experience. They are very elusive creatures, that are both solitary and magnificently well camouflaged against the sand coloured rocks and earth of the Patagonian landscape.

I only had two days (which in Puma tracking terms really only meant one evening and one morning) with an expert guide to try and spot one. Knowing how hard it can be to track them down, I didn’t set my expectations too high. The first afternoon/ evening was spent exploring the private land of Estancia Laguna Amarga. It was not until we returned back to the ranch just before dark, that someone came dashing in to say that a female with two cubs had just walked right past the estancia on the other side of the road! Unfortunately they had sloped off into the darkness by the time we had arrived, but it gave us new hope for the next day. 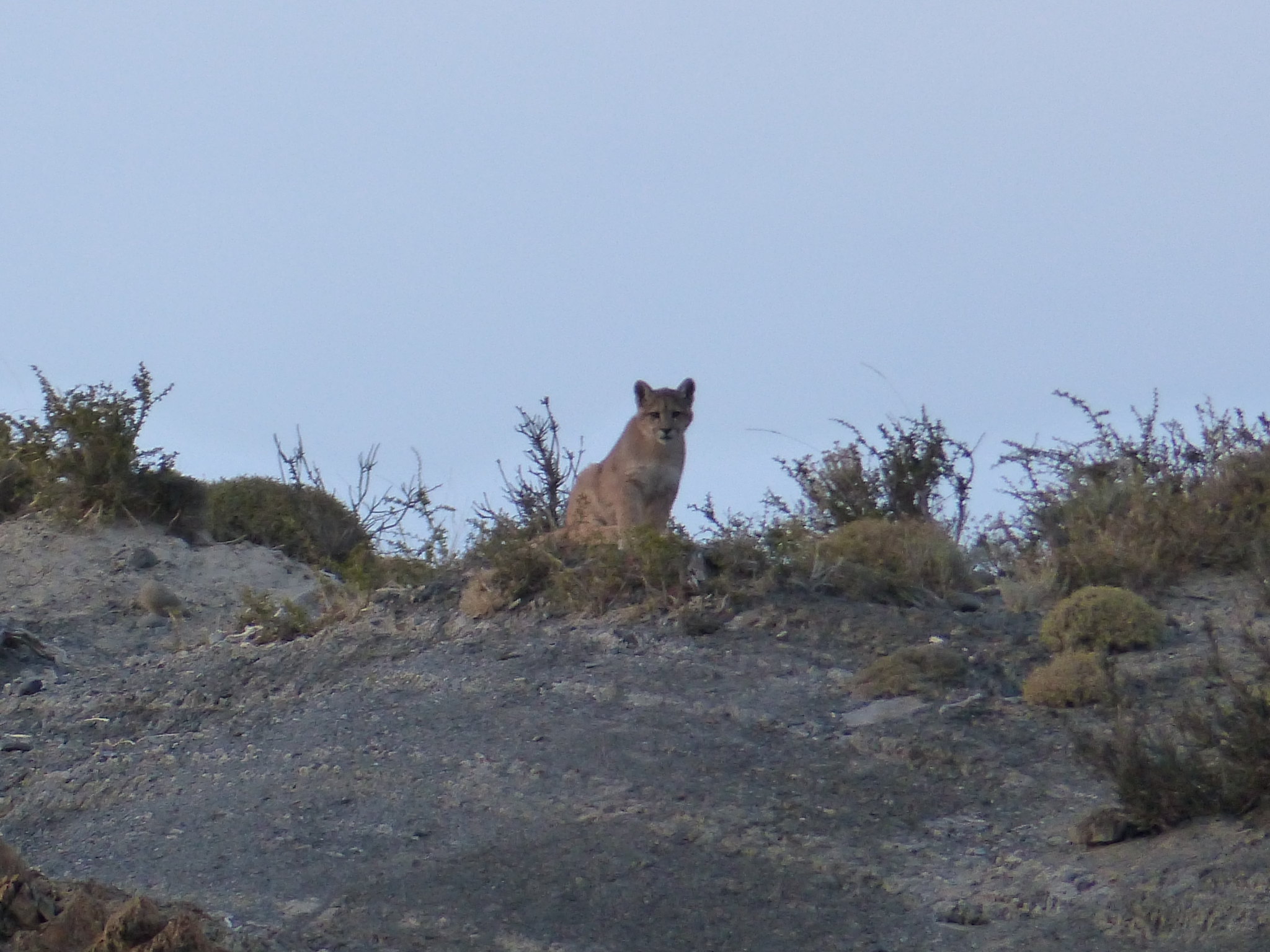 Departing in the pitch black early the next morning, we reached Laguna Amarga in time for sunrise. After exploring for a few hours we had almost given up (the pumas head for their siesta around 10am), when all of a sudden my guide reached for his binoculars; he had spotted a female with two young cubs, making their way up the ridge to our left. Then, just five minutes down the road, another female, this time with one older cub. I could not believe my luck to have seen five pumas in ten minutes! It spoke volumes though about the expertise of our local guides, and the health of the puma population of Torres del Paine. Two females with cubs sharing the same territory is a very encouraging sign. I left feeling extremely fortunate, and full of hope for the future of these pumas.

Whales are a particular favourite marine species of mine, I’m fascinated by their mystery: their sheer size, their intriguing songs and apparent sense of family bonds / community.

After eight hours navigating the choppy waters of the Magellan Strait in a small but fairly comfortable boat, I was pleased to make it to the more sheltered waters of the Barbara Channel. Here, a family of around 10 humpback whales were gathered and could be observed several at a time, blowing clouds of spray into the air, and showing off their dorsal fins and tail flukes. 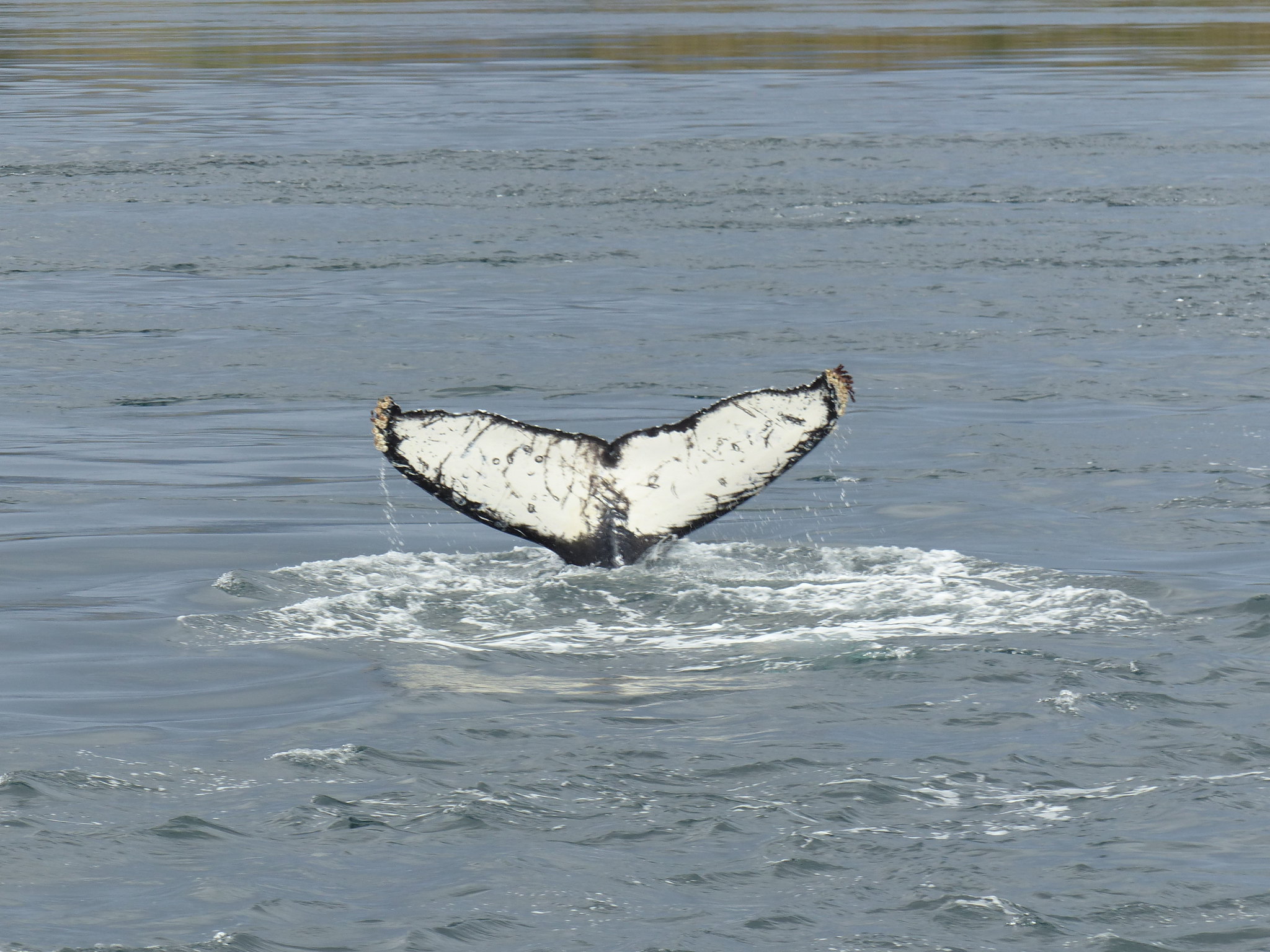 The following day, in the same channel, we were surrounded almost constantly by the sounds of exhalations of water, tail flukes slapping the water, and occasionally the humongous crash of a full grown humpback leaping elegantly out of the water, and disappearing gracefully (with a huge splash!) beneath the surface again. 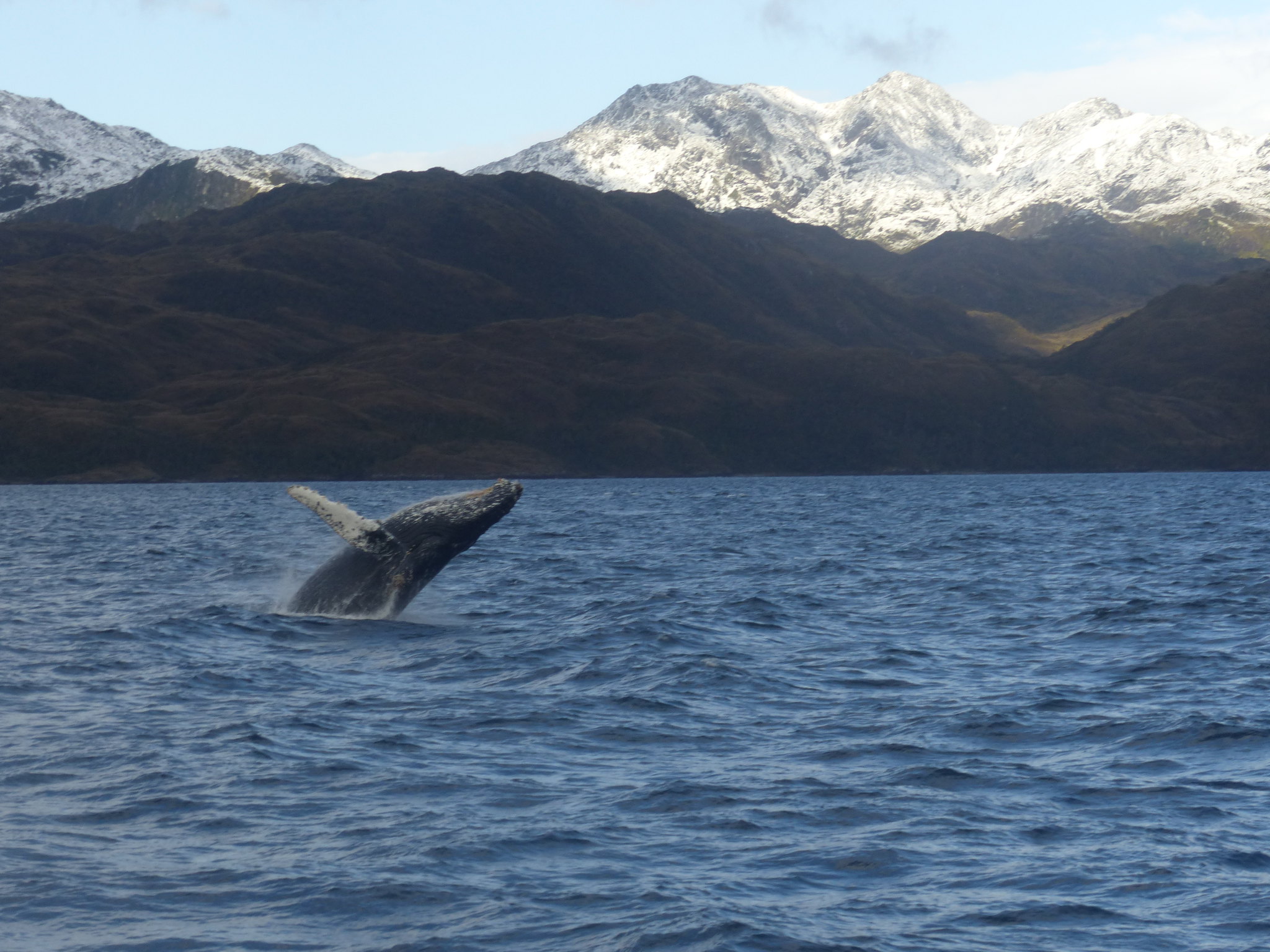 Humpback numbers have been increasing in these waters year on year, since whaling was banned. Many of the same individuals return each summer to feed in these calm and fruitful channels – I saw more than 30 individuals across those two days. Read more on Whale Watching in Patagonia.

At Tucker Islets during my cruise from Punta Arenas to Ushuaia, I got to experience the sheer comedy value of Patagonia’s Magellanic penguins. Waddling around seemingly aimlessly, going for a quick dip in the icy water, sunbathing to warm up afterwards and clearly bickering with one another, these penguins quickly had me hooked!

We were able to sail around a network of small islands in the Chilean Fjords, in small zodiac boats, and although we were not able to disembark and walk among the penguins (the islands are protected), you get within feet of them as they waddle along the shore line.

There were so many unusual shapes, sizes, breeds, colours, and behaviours of bird to discover in Patagonia.

I was particularly keen to see was the Magellanic woodpecker, and whilst casually hiking through the Nothofagus forests in the Los Glaciares National Park, I was stopped in my tracks by the sound of tapping. I looked up and just a metre from my head, there was the gorgeous red and black woodpecker, busily tapping away at the tree trunk! 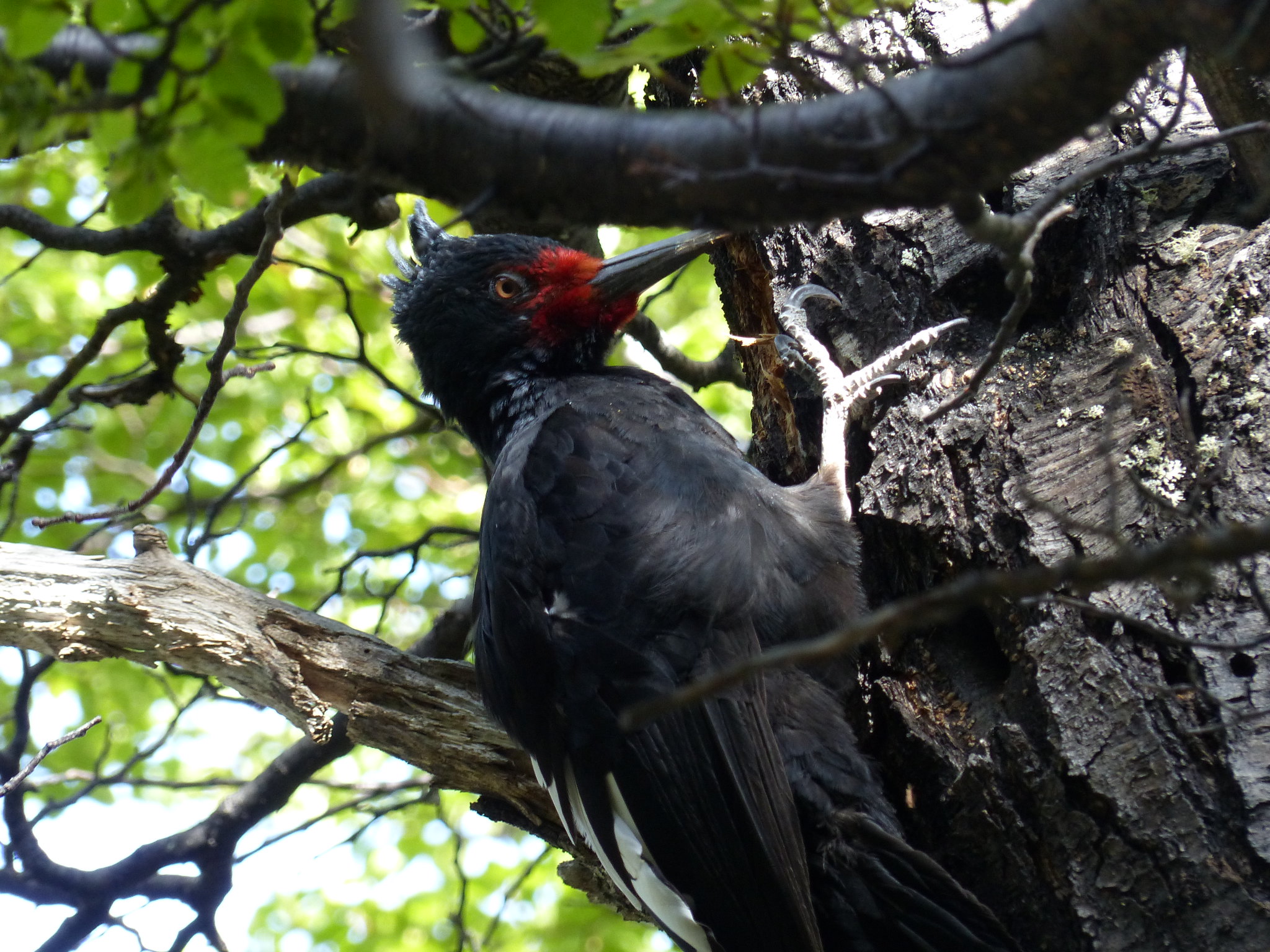 Not far from here, I also saw a gorgeous pair of vibrantly colourful Austral parakeets, all loved up and chirping away in the treetops above me. 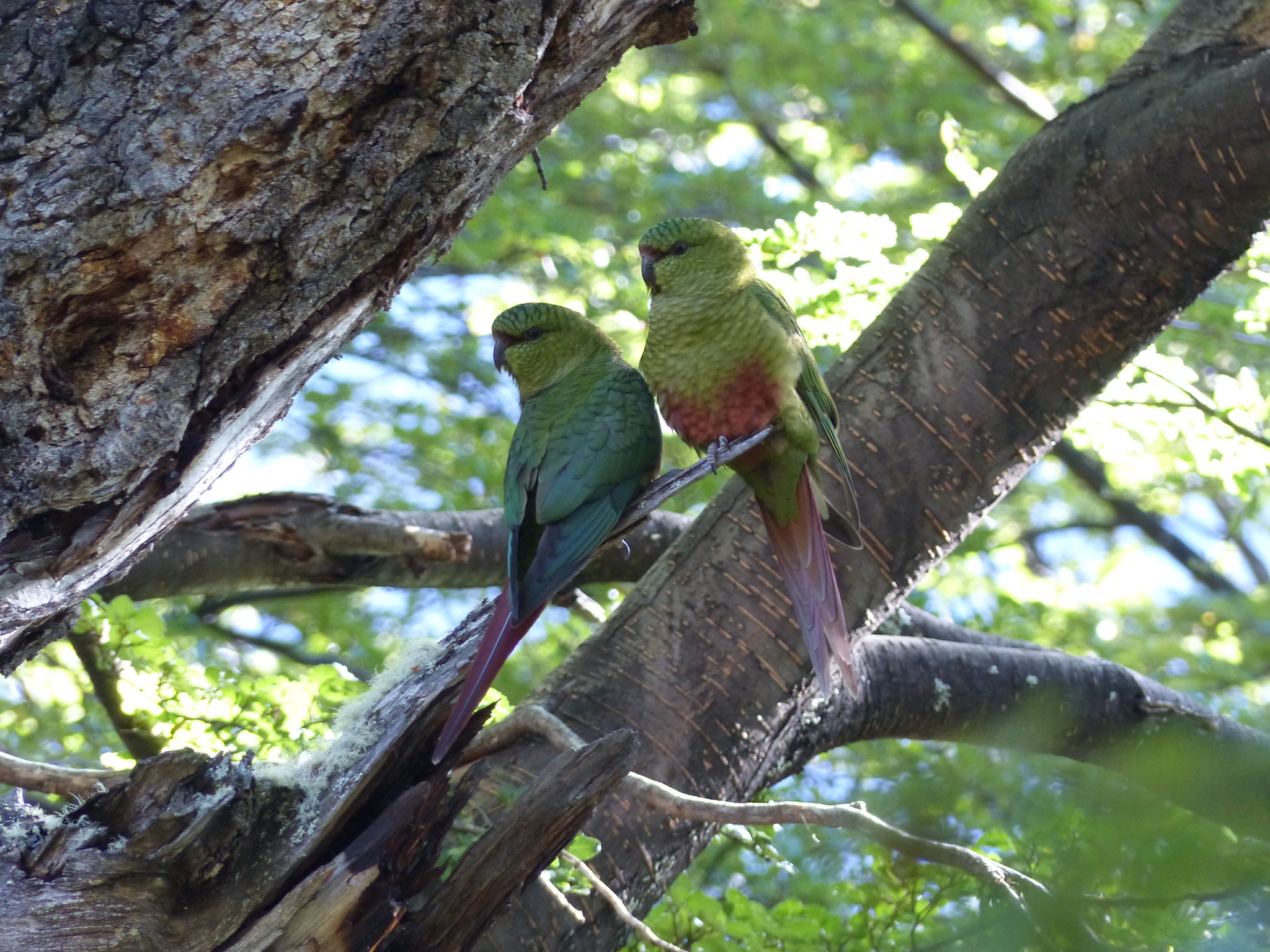 I also spotted this majestic chimango caracara perched in a dead tree scouting for a dinner of mice. 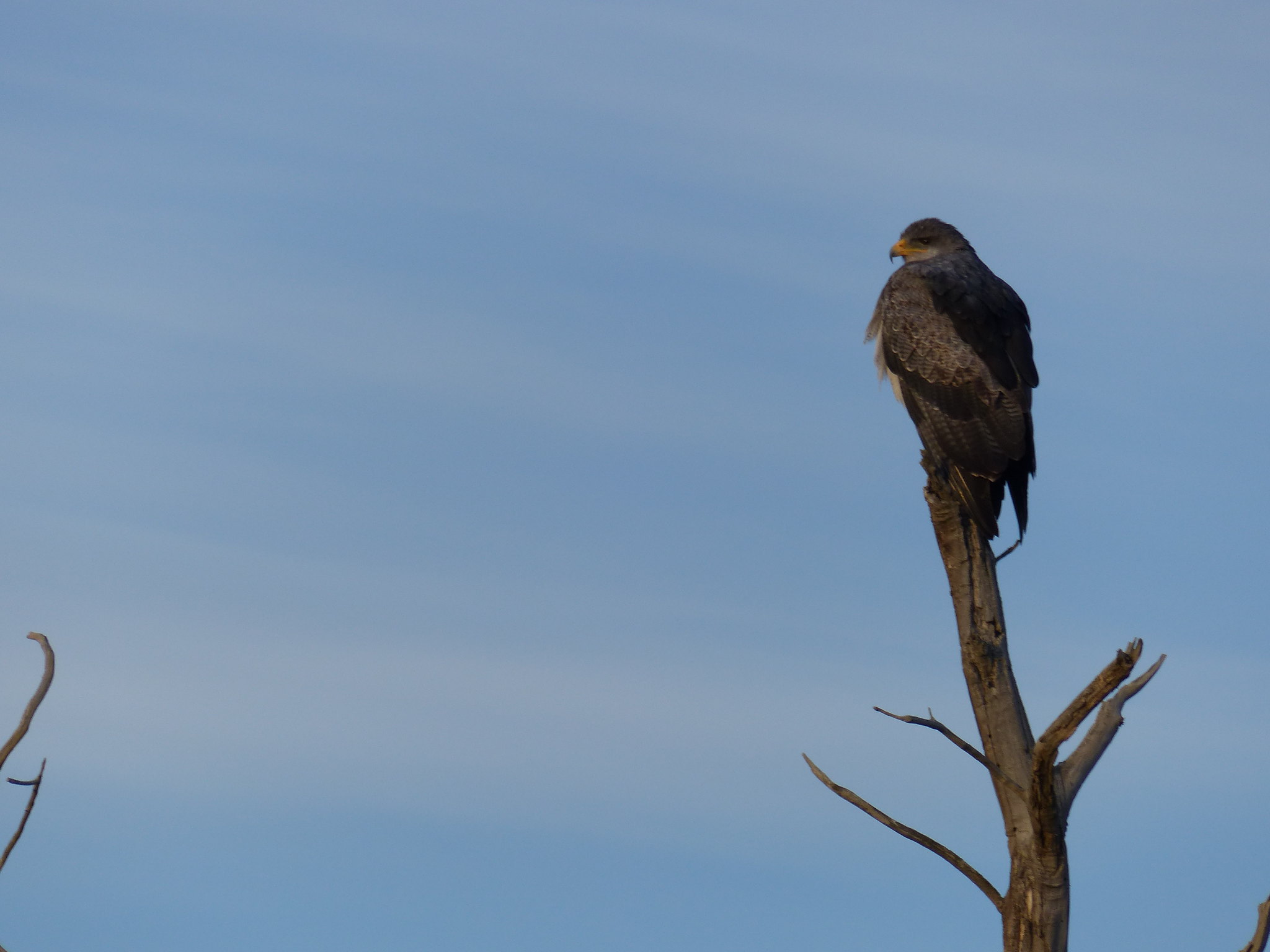 Other wonderful creatures I met along the way included skunks, flamingos, guanacos, condors, sea lions, sea birds such as cormorants, albatross and geese, red and grey foxes and rheas. All in all, an incredible wildlife lover’s adventure that I will cherish forever, and would recommend to anyone who appreciates nature at its wildest.

In three weeks, I visited some of Patagonia’s most iconic sights including a visit to Perito Moreno glacier (where I did an ice-hike) and horse-riding on the Patagonian steppe. I kayaked and cruised my way along some beautiful stretches of water and of course I visited the iconic towers of Torres del Paine, witnessing the most amazing sunrises and sunsets. Read more about my incredible Patagonian adventure.

Get in touch with Swoop who can help you make your wildlife adventure dreams a reality and browse the wealth of wildlife information we have on our website.

In ‘An Englishman in Patagonia’, John Pilkington beautifully details his eight-month backpacking trip, south from Santiago, winding his way along the Andes, through the heart of Patagonia to the end of the world in Ushuaia, before heading back up the…
END_OF_DOCUMENT_TOKEN_TO_BE_REPLACED

Many of our customers visit Patagonia to enjoy the extensive variety of hiking trails in Torres del Paine, Los Glaciares, Tierra del Fuego and further north towards the Lake District. They will often ask us “why should I use a…
END_OF_DOCUMENT_TOKEN_TO_BE_REPLACED

My mission during my recce of Patagonia in spring 2016 was to delve into Chile’s little-known region of Aysén. I tracked condors, mountain biked in remote national parks and took to the water multiple times to see sights only accessible by boat…
END_OF_DOCUMENT_TOKEN_TO_BE_REPLACED

A handful of Swoop’s customers choose to venture to both Patagonia and the Antarctic on the same trip. Swoop only specialises in these two destinations and so is perfectly placed to offer the dream trip to someone looking for a…
END_OF_DOCUMENT_TOKEN_TO_BE_REPLACED